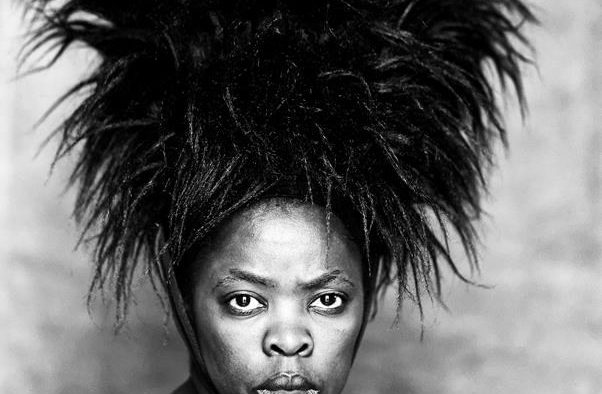 It was previously shown in the Netherlands in group exhibitions and is represented in several Dutch collections. Muholi’s self-appointed mission is: ‘to re-write a black queer and trans visual history of South Africa for the world to know of our resistance and existence at the height of hate crimes in SA and beyond’.

To be seen in Stedelijk is a selection from Faces and Phases (2006 – present), a series of powerful, moving and intrusive portraits of women from the lesbian community in her country, from the Brave Beauties series, about transgender, and from her most recent series Somnyama Ngonyama (Hail, the Dark Lioness), in which she herself figure. Muholi photographs from an ‘insider position’ the black lesbian and transgender community in South Africa. Her photo series analyze and comment on sensitive and often witty stigmatizing representations of the black lesbian woman.

For the first time here Muholi’s most recent series Somnyama Ngonyama (Hail the Dark Lioness, 2015) will be featured. In this series of self portraits, a radical new step in her work, Zanele depicts herself in the many forms she embodies as a black lesbian woman, often in theatrical scenes. With the extremely high black and white contrasts she uses, she emphasizes her ‘blackness’. Conservator Hripsimé Visser: “Her self portraits are incredibly confrontational but also funny and touching. In an extremely inventive way, Muholi creates historical, cultural and personally inspired versions of blackness. She undermines the black women’s clichés and refers to current discussions about stigmatization and stereotyping. “

Zanele Muholi was a hairdresser in her youth and became a photographer thanks to the Market Photo Workshop, a photo-education program by the famous South African photographer David Goldblatt in Johannesburg for young students without financial opportunities. Hair-dos and fashion or at least attention to clothing and presentation would continue to play a major role in Muholi’s work. In the series Somnyama Ngonyama, she plays with the cultural references that contain the often so complex African haircuts, by embracing hair creations incorporating completely banal household items, such as clothespins or abrasive pads. This series is still under development and should eventually result in 365 self portraits, one for each day of the year. 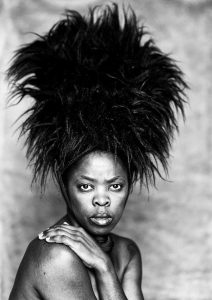